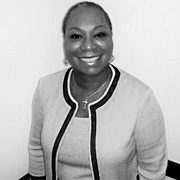 Sherry Johnson recently joined SunTrust Bank of Atlanta, GA as a First Vice President of Talent Acquisition and Diversity. In this role, she is responsible for developing and executing talent acquisition and diversity strategies and initiatives, operations, metrics and overall management for the recruiting of exempt, non-exempt, professional and executive staff at SunTrust Bank.

Johnson served in numerous community service roles including The United Way of Massachusetts Bay as a Loaned Executive, The Partnership Boston Fellow, Class of 2001-2002, Boston Marathon Jimmy Fund, The Coalition of 100 Black Women, and the Greater Framingham Community Church Mentoring Program. She served on the boards of Project Place, North Side Community Center and the Women’s Foundation of Southern Arizona. She currently serves on the Georgia Diversity Council board. She was selected by the ABC President of Community Services from an international field of candidates to serve as an ABC Intern and was recognized by FleetBoston Financial as “Best in Class” in their Human Resources Program.

Johnson holds a Bachelors of Arts, Mass Communications from Columbia College in Chicago, Illinois and a Masters of Management from Cambridge College, Cambridge, Massachusetts.