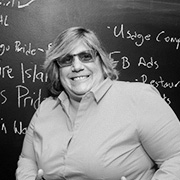 Marci Alt is one of the Partners and Chief Executive Officer of Carma Productions, Inc. The proud producers of The Gay Community Yellow Pages and Gayborhood. In 1989, Marci relocated to Atlanta, shortly after her move, she realized the need for a resource directory to ensure members of the LGBT community are treated with the same respect as everyone else and The Gay Community Yellow Pages was born. In 2008, Marci and her business partner founded Carma Productions.

Over the years, Marci has participated in several local non-profit organizations, having been involved with Mega Family Project, Out on Film, North Georgia Rainbow Coalition, GLAAD. She is currently sitting on the Board of Directors for AGLCC.

When she is not at work or volunteering, Marci enjoys being “Mapa” to her two beautiful children Alexandria and Nicholas.