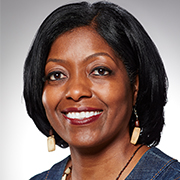 In addition to Lewis’ regular responsibilities, she served as co-chair of Clorox’s annual employee giving campaign in 2013 and 2014 in which over$9M was donated to non-profit organizations. Also, she launched Clorox’s first affinity group outside the bay area.

Prior to Clorox, Lewis served asGroup Manager for The Coca-Cola Company. She began her career with First Family Financial Services which was later acquired by Citigroup Financial Services. Lewis progressed through the ranks to VP of Operations.

Lewis holds a Bachelor of Sciencedegree in mathematics from The University of Alabama. She serves on the Board ofDirectors forthe Ronald McDonald House Charities.

Lewis and her husband, Ray, own The Island News Stand in downtown Atlanta, GA. She enjoys hosting financial seminars, Alabama football and volunteering. Lewisis a native of Mobile, AL and resides in Fulton County, GA.

The best way to summarize Lewis’ career journey is a quote from her personal mission statement: “As I live each day on purpose…I will be remembered as a servant leader who loved her family, gave to society and contributed to business.”