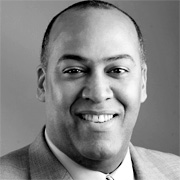 Gerry Fernandez is founder and president of The Multicultural Foodservice & Hospitality Alliance (MFHA). Fernandez founded MFHA in 1996 while employed as a national account manager at Minneapolis-based General Mills, Inc. He began his research and development career with General Mills in 1992. Before joining General Mills, Fernandez spent more than 10 years as a senior manager for restaurant company RARE Hospitality, Inc. (now owned by Darden), which is known for such fine – dining concepts as The Capital Grille, Hemenway’s Seafood Grill & Oyster Bar, and The Old Grist Mill Tavern.

Fernandez has received numerous awards such as the Fathering Hall of Fame in 1996 from the National Center for Fathers and General Mills’ “Champion’s Award” in 1997. He was the first recipient of MFHA’s Ernest Henry Royal “Pioneer Award,” a recipient of Nation’s Restaurant News’ “Innovator of the Year” award, and was named a “Rising Star” by Restaurant Hospitality magazine in 1998.